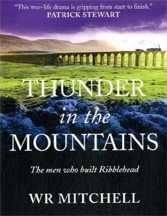 Thunder in the Mountains

This book is Pre-Loved

The Men Who Built Ribblehead….out of print in 2012 in hard back format So this is A pre-loved copy in good condition, the dustjacket is priced clipped and some rubbing to its edges. It has a signed bookplate but has been dedicated with a name on!!!! ONLY ONE COPY!

The true story that captures the drama and harsh reality behind the building of this iconic structure. For years the dominant sounds at Ribblehead were the bleating of sheep and the croaky calls of grouse. Then came the railway engineers and their men, linking Settle with Carlisle. Thunderous noises, including a new-fangled explosive called dynamite, echoed in and around the mountains. Ribblehead Viaduct, which symbolises the strength and durability of the Settle-Carlisle railway, was built by a Victorian work force. How that force was mustered and how its various skills were applied in a bleak high Pennine setting, are related in this book. The railway settlement on and around Batty Green, at the headwaters of the Ribble, lived, throve and died in less than ten years. As men constructed the longest viaduct on the line, others were hacking and blasting their way through Blea Moor, warming dynamite in their pockets before use! The Batty Green workforce, their wives and children, experienced earthquake, flood and an outbreak of smallpox. Read about their austere lives, about saints and sinners. A railway missionary preached the Gospel and organised ‘penny readings’. Policemen and excise men snooped around the huts at night, detecting illicit drinking of beer that retailed at sixpence a quart. The Settle-Carlisle line was built by a single enterprising company in a single feverish spell of activity and at an expenditure of almost GBP 3.5m. This book has unlikely heroes. Job Hurst, sub-contractor at the viaduct, taught his building craft in his native Yorkshire, exercised it on the Bombay to Poonah railway, the first on the sub-Continent of India, then demonstrated it on the Pennines. Information about Job Hurst came from descendants living in America. Harry Cox was among those who re-bricked the arches of Ribblehead viaduct before the First World War. In the 1980s, Tony Freschini was resident engineer when the celebrated viaduct was renovated. Words and pictures relate how a railway was built across vacant, wine-red moorland….Ref: 1261