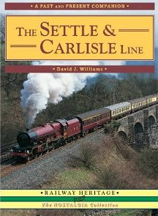 The Settle and Carlisle Line:

British Railways Past and Present

NOTE : COVER VARIES SLIGHTLY FROM THE ONE SHOWN : SAME ISBN

The Settle & Carlisle line has been described as ‘the most spectacular in England’. Constructed by the Midland Railway to provide a third route to Scotland, the only way available was across the very roof of England, and the terrain meant that the line was the most difficult ever built over such a distance – 72 miles end to end. The long and severe gradients, the tunnels and viaducts and the wild scenery ensured that the line would become enshrined as one of the best to see steam hard at work. However, by the 1970s the intermediate stations had been closed, the last remaining long-distance passenger train ran in 1982 and the line was proposed for closure. Thanks to public outcry and the efforts of the Friends of the Settle & Carlisle Line, the route survived, being reprieved 20 years ago in 1989. Since then it has once again become a firm favourite for steam excursions, as well as providing a revitalised public train service. It is many years since the line featured in a ‘Past and Present’ volume, so to rectify the situation and celebrate 20 years since the threat of closure was lifted, this ‘Companion’ follows a journey along the entire route, and several of the ‘feeder’ lines, telling in words and pictures the fascinating story of this iconic railway, and illustrating its varying fortunes over more than 130 years…Ref: 395

David Williams is the author of a recent ‘Past and Present Companion’ on the West Somerset Railway, and is editor of the WSR Journal and the Bachmann Collectors Club Magazine. He lives in Birmingham.