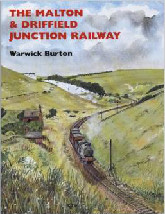 Between the 1920s and 1950s the line saw use transporting chalk from the Burdale and Wharram quarries. Passenger services ended in 1950; the Burdale quarry closed in 1955, and the line closed in 1958…..illustrated in black & white…Ref: 483