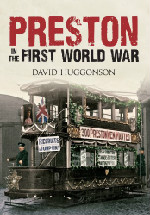 Preston in the First World War

On 4 August 1914 the people of Preston received news that war had been declared. Local newspapers printed explosive headlines stating this fact, and four years of hardship, uncertainty and loss followed. From recruitment and the Pals, to women joining the war effort in munitions factories, news from the front, rationing, and eventually demobilisation, this book provides a valuable insight into the city’s experience of one of the greatest events of the twentieth century.

This book has been designed to inform you, the reader, of how the city coped with the war by presenting first-hand accounts. You will read letters from those who served at the front, interviews with local people who spoke of their childhood memories and extracts from local newspapers.

David Huggonson first became interested in Preston and the First World War in 2003 during voluntary work for a local museum. It has since formed the subject of an MA thesis. In 2014 David will be working alongside volunteers and museum curators on the ‘Preston Remembers’ project, which has received Heritage Lottery Funding and will mark the centenary of the outbreak of the First World War in the city. David lives in Preston…Ref: 460