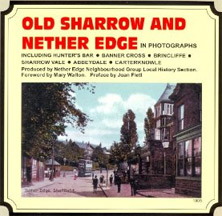 Old Sharrow and Nether Edge in Photographs includes photos and descriptions of the houses and farmsteads which existed when this was a largely rural district including hamlets such as Machon Bank and Cherry Tree Hill, the farms of Upper Edge, Nether Edge and Edge End, ancient bridleways like Archer Lane and Brincliffe Edge Rd and trackways known today as Sharrow Lane and Psalter Lane.

It has photos of many of the large Georgian and Victorian houses built for Sheffield s wealthy merchants and manufacturers including George Wostenholm of Kenwood who laid out the tree lined estate around his park..