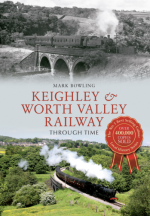 The Keighley & Worth Valley Railway is perhaps best known for its role in the 1970s film The Railway Children, based on Edith Nesbit’s much-loved book. Perhaps less known is that the railway has appeared in many other television and film productions, including Yanks, Sherlock Holmes, Last of the Summer Wine, Some Mothers Do ’Ave ’Em and A Touch of Frost. Today, the recreated 1950s branch line certainly does draw the eye.

The 5-mile-long line was first incorporated by an Act of Parliament in 1862 and was built soon after. Built single-track and originally operated by the Midland Railway, the line would serve a number of industries in the area. As a result of the Beeching Act, the line closed completely in 1962. However, the line has been recreated and the Keighley & Worth Valley Railway is once again in operation.

Mark has had an interest in Railways from childhood, and this has developed over the years. During the last 20 years, he has also become a keen photographer, with his photographs being published in a previous book and also in several magazines. Additionally, he enjoys researching the history of the subjects that he photographs, and has thoroughly enjoyed combining these interests in this, his second book…Ref: 458