W.R. (Bill) Mitchell was born in Skipton in 1928. After gaining journalistic experience on the local paper the “Craven Herald”, he joined “The Dalesman” in 1948, later becoming editor.

He retired in 1988. “The Dalesman”, first published from the Dales village of Clapham in 1939, is one of the country’s most notable regional magazines, which features Yorkshire life, past and present. Besides his involvement with “The Dalesman” and its sister magazine, “Cumbria”, which he also edited for many years, Bill Mitchell has written over 100 books, and articles for other journals and local newspapers. In June 1996 he was awarded the MBE,and in July 1996 the University of Bradford awarded him the honorary degree of Doctor of Letters.

Some of the books are from the Castleberg imprint which Mitchell set up in 1988 to cover specific topics of his research. Altogether, the books cover many regions of Northern England, including Lakeland, Lancashire, the North York Moors and the Peak District and focus on walking and other leisure activities, caving, wildlife, social life and customs, humour, local history and much more…. 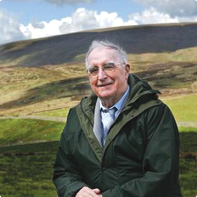