Hazel Wheeler was just 14 when she found an empty diary in the attic of her parents’ shop in Deighton in 1941 and decided to keep a record of her life. Now she has passed away at the age of 82, having kept that diary for every day of the past 68 years. Every detail of her life, from earth-shattering events to personal concerns, was faithfully committed to paper.

She said: “It was the first diary I’d seen, dated 1936, and I was fascinated by the idea. I altered the dates to 1941 and started recording daily happenings. Writing in my diary became as important as cleaning my teeth. I’d write down what I’d said and done, what I felt, love affairs, prices, world events, everything. I wanted to make sure I could always remember what happened every day of every year of my life“.

Her diaries filled an entire bookcase of her flat in Canterbury.

Mrs Wheeler died in September 2009, in hospital in Ashford, Kent, after a short illness. Her death was unexpected and was a shock to both of her daughters, Caroline and Elizabeth.

Although she had lived for the last two years in Canterbury to be near family, her heart was definitely where her roots were in Huddersfield.

Her father had owned a shop, and Hazel grew up, married a local man, had her family, and was that much a local girl, that she never even once went abroad, choosing instead to stay in her beloved Yorkshire. She spent most of her life married to Granville who passed away in 1999.

Some of her work was put into print and two of her books, Living on Tick and Milner’s Apprentice, which we currently have in stock 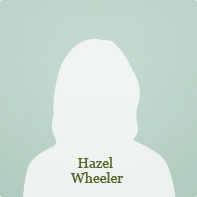