Local author based in Lake District

Beatrix Potter was born on 28 July 1866 in South Kensington, London. She lived a lonely life at home, being educated by a governess and having little contact with other people. She had many animals which she kept as pets, studying them and making drawings.

Her parents took her on three month summer holidays to Scotland, but when the house they rented became unavailable, they rented Wray Castle near Ambleside in the Lake District. Beatrix was 16 when they first stayed here. Her parents entertained many eminent guests, including Hardwicke Rawnsley vicar of Low Wray Church, who in 1895 was to become one of the founders of the National Trust.

His views on the need to preserve the natural beauty of Lakeland had a lasting effect on the young Beatrix, who had fallen in love with the unspoilt beauty surrounding the holiday home.

For the next 21 years on and off, the Potters holidayed in the Lake District, staying once at Wray Castle, once at Fawe Park, twice at Holehird and nine times at Lingholm, by Derwentwater, famous now for its rhododendron gardens. Beatrix loved Derwentwater, and explored Catbells behind Lingholm. She watched squirrels in the woods, saw rabbits in the vegetable gardens of the big house. She made many sketches of the landscape. They still kept in touch with Rev Rawnsley, who after 5 years at Wray, moved to Crosthwaite Church just outside Keswick.

Rawnsley encouraged her drawings, and when back in London Beatrix made greetings cards of her pictures, and started a book. Rawnsley encouraged her to publish, and eventually Frederick Warne published ‘The Tale of Peter Rabbit’ in 1902. Her third book, ‘Squirrel Nutkin’ had background views based on Derwentwater, Catbells and the Newlands valley. Fawe Park featured in ‘The Tale of Benjamin Bunny’.

In 1903 Beatrix bought a field in Near Sawrey, near where they had holidayed that year. She now had an income from her books, Peter Rabbit having now sold some 50000 copies. In 1905 she bought Hill Top, a little farm in Sawrey, and for the next 8 years she busied herself writing more books, and visiting her farm. In 1909 she bought another farm opposite Hill Top, Castle Farm, which became her main Lakeland base. Seven of her books are based in or around Hill Top. Tom Kitten and Samuel Whiskers lived there. Hill Top is still as it was then, and is now the most visited literary shrine in the Lake District.

Beatrix Potter married William Heelis, a solicitor in Hawkshead, in 1913. Then started the next stage in her life, being a Lakeland farmer, which lasted for 30 years. The office of William Heelis is now the National Trust’s ‘Beatrix Potter Gallery’. 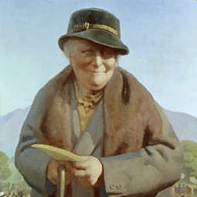