Local author based in Lake District

Alfred Wainwright was born in Blackburn in 1907, Lancashire into a family which was relatively poor. He left school at the age of 13 Whilst most of his classmates were obliged to find employment in the local mills, Wainwright started work as an office boy in Blackburn Borough Engineer’s Department. He spent several further years studying at night school, gaining qualifications in accountancy which enabled him to further his career at Blackburn Borough Council.

Even when a child Wainwright walked a great deal, up to 20miles at a time; he also showed a great interest in drawing and cartography, producing his own maps of England and his local area.

A holiday at the age of 23 kindled a life-long love affair with the Lake District. Following a move to Kendal in 1941 he began to devote every spare moment he had to researching and compiling the original seven Pictorial Guides.

Wainwright followed the Pictorial Guides in 1968 with the Pennine Way Companion, applying the same detailed approach to Britain’s first long-distance footpath. This was for many years a leading guide to the Pennine Way, rivalling the official guide book by Tom Stephenson. Wainwright’s book consists of a continuous strip map of the route with accompanying commentary, with an unusual quirk: because the route goes from south to north (bottom to top on a map), contrary to normal reading order, the map and commentary start at the bottom of the last page and work upwards and backwards towards the front of the book. The guide was prepared with the aid of four helpers (Harry Appleyard, Len Chadwick, Cyril Moore and Lawrence Smith) and its preparation was affected by the major outbreaks of foot and mouth disease in 1966 and 1967, which closed access to many of the moors.

In 1972 Wainwright devised the east-west Coast to Coast Walk, partly as a conscious alternative to the north-south Pennine Way. The Coast to Coast, he declares in his guidebook to the route, which follows the same format as the Pennine Way Companion, “puts the Pennine Way to shame” for scenic beauty, variety and interest. The 190-mile route traverses the north of England from St. Bees to Robin Hood’s Bay, passing through the Lake District, the Yorkshire Dales and the North York Moors national parks. 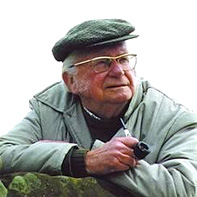