Alan Bennett is an English author and actor noted for his work, his boyish appearance and his sonorous Yorkshire accent. He was born in Armley, Leeds in 1934. The son of a Co-op butcher, Bennett attended Leeds Modern School (a former state grammar school), learned Russian at the Joint Services School for Linguists during his National Service, and gained a place at Cambridge University. However, having spent time in Cambridge during national service, and partly wishing to follow the object of his unrequited love, he decided to apply for a scholarship at Oxford University.

He studied at Exeter College, Oxford, then after a period of National Service, became a lecturer for a short time at Oxford University. He co-wrote and starred in Beyond the Fringe (1963), a satirical review, along with Dudley Moore, Peter Cook and Jonathan Miller, at the Edinburgh Festival in 1960. Later the show travelled to the West End and to New York. After this, he started writing for the stage, and later, plays for television. To date he has been actor, director, broadcaster, and written for stage, television, radio and film. His work focuses on the everyday and the mundane; on people with typically British characteristics and obsessions.

Alan Bennett now lives in the village of Clapham in the Yorkshire Dales. 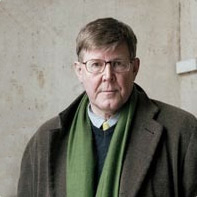