A town in South Yorkshire, Barnsley lies on the River Dearne. Surrounded by several smaller settlements which together form the Metropolitan Borough of Barnsley, of which Barnsley is the largest and the administrative centre. The metropolitan borough had a population of 218,063 (2001 UK Census)

Historically a part of the West Riding of Yorkshire, Barnsley is notable as a former industrial town centred on coal mining and glass making. Though these industries declined in the 20th century, Barnsley’s local culture remains rooted in this industrial heritage; Barnsley has a tradition of brass bands, originally created as social clubs for its mining community. The coat of arms for the town includes a coal miner and a glass-blower.

The town is known for coal mining, although most of the pits were actually in the surrounding villages, rather than in the town itself. All of the mines in the borough are now closed,  Goldthorpe was the last to close in 1994.

Wire, linen and glass-making were also major industries, but only glass-making remains, with one large company still operating. 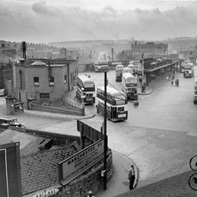