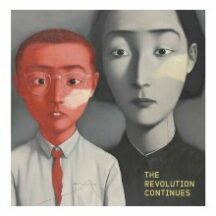 New & Sealed in cellophane ONLY ONE COPY AVAILABLE!

As world attention focuses on the economic development and massive cultural upheavals of China, all of which are embodied in the transformation of Beijing prior to the 2008 Olympics, Chinese artists have emerged after years of containment by the strictures of the national ideology. The Western art world, hungry for new spectacle, has consumed the new art with an appetite, but the art is changing so fast the Western viewer has little means of assessing or understanding the background to these extraordinary developments. The Revolution Continues provides a link between the rebellious spirit of the current generation of Chinese artists and the mood of rebellion that was so explicitly evident during the years of the Cultural Revolution that ran from 1966 to the death of Mao and the fall of the Gang of Four in 1976. In his text Jiang Jiehong argues that the widespread destruction of traditional Chinese treasures by the Red Guards, especially in the early period of 1966, overshadows the entire period. Today’s rebellious artistic spirit is, in fact, an extension of Mao’s legacy.

The extensive Saatchi collection of new Chinese art is presented in conjunction with Joshua Jiang’s examination of the use of the colour red, the iconography of Mao, the sense of the collective and the use of textual language that derives from the calligraphy of the propaganda poster. This dramatic material will be published to coincide with one of the opening exhibitions at the new Saatchi Gallery…..Ref: 1302