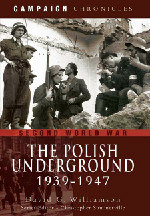 The Polish partisan army, the largest in Europe, fought with extraordinary tenacity against the Wehrmacht during the Warsaw Uprising. This was the most famous manifestation of organized, large-scale, armed resistance to Hitler’s rule. Yet the wider story of the Polish underground movement, which fought the Nazi and Soviet occupying powers, has rarely been told. As David Williamson demonstrates in this concise and authoritative new study, a reassessment of the actions, the impact and the legacy of Polish resistance is long overdue.

He tells a fascinating, often tragic story. The resistance movement sprang up rapidly after the shock of defeat of 1939, and the network grew and adapted as the war progressed. It took many forms, propaganda, spying, assassination, disruption, sabotage and guerrilla warfare. Many different groups, some with conflicting aims and loyalties, were involved. There were isolated partisan bands, the Jewish resistance which fought defiantly against deportation to the death camps, and the Home Army which confronted the Germans in Warsaw with such disastrous consequences in 1944. The scale and intensity of the resistance movement, which was fighting against overwhelming odds, were quite remarkable.

David Williamson’s graphic account goes beyond the formal end of the Second World War, for Poland remained in a state of flux as a clandestine civil war was waged between the Communists and former members of the Home Army until the Communist regime took power in 1947. His study offers an absorbing insight into the plight of Poland during the war and into its immediate post-war history….Ref: 1203