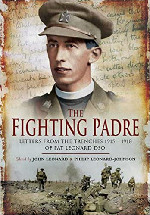 Pat Leonard served throughout the Great War as a Chaplain to the Forces in France, Belgium and, after the Armistice, in Germany. Along with the many hundreds of letters he wrote to the relatives of those ‘parishioners’ who died or were wounded, he found time to describe for his parents back at home the awful reality of life in the Trenches, and on the makeshift aerodromes from which the pilots of the Royal Flying Corps operated from the Observer’s seat which liberated his spirit from the mud of Flanders.

Very much a ‘front-line’ priest, his descriptions provide an unusually objective view of army life, and of the job of the multi-tasked chaplain who was expected to undertake the roles of counsellor, comforter, caterer, censor, entertainments officer and sports supreme to name but a few. The extracts selected from his letters are full of detail, humour, self deprecation and just sometimes when judged by today’s standards, mild ‘political incorrectness’!

Known as ‘a veritable fighting parson’ (because of his prowess in the boxing ring) he also played rugby for the RAF, was mentioned in dispatches, and was decorated for bravery.

90 years have passed before this opportunity arises to share his account of a life which the world remembers as ‘dreadful beyond belief’. Reading it demonstrates that despite the ghastliness, human qualities emerged with which we should all be proud.

Pat Leonard was born in 1889 into a clergy family in Cumbria, MPG (Pat) Leonard went from being Head of School at Rossall to Oriel College, Oxford on a mathematics scholarship. After graduating and obtaining a TA Commission in the King’s Own Royal Lancaster Regiment, Leonard served as a curate in a Manchester parish before being accepted as Chaplain to the 8th Battalion, the King’s Own, from September 1915 in the battlefields of the Somme Awarded the DSO for bravery and mentioned in dispatches, he transferred to the RFC in early 1918. After the war he was much involved in the development and growth of TocH throughout the world. Subsequently after a period as Rector of Hatfield and ten years in Glasgow as Provost of St Mary’s Cathedral he was consecrated Bishop of Thetford in 1953. ..…Ref: 1186