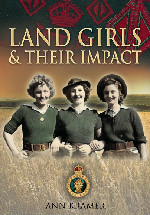 The Women’s Land Army, better known as the Land Girls, were vital to the war effort from their early days in the First World War and their hard work in the Second World War until they were finally disbanded in October, 1950. Using original interviews and photographs, as well as other primary sources, Ann Kramer explores their impact from their early history to the present day with their achievements finally recognised with a Land Girls’ commendation in the form of a badge. Typists, hairdressers and shop girls, as well as those who grew up tending the land, were suddenly expected to handle tractors, milk cows and plough fields with huge horses whilst the Lumber Jills (Women’s Forestry Corps) felled trees. Training was minimal and facilities varied from the impressive Dumbleton Hall which Hitler intended to make his home, to huts where baths were rare. The Land Girls’ lot was often a hard one and they knew discrimination, but they gained friendship, love and discovered just what a woman could achieve in time of war and beyond. Their experiences helped ensure the nation could survive whilst its men were fighting but it is their individual stories, many recorded here for the first time, which show the reality of their lives, of how others perceived them, what they learnt, why they became Land Girls in the first place and just how liberating it could be – for the first time, women were wearing the trousers..Ref: 746