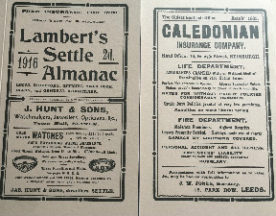 JOURNALIST, author and local historian Dr Bill Mitchell has had many dealings with Settle printers Lamberts over the years. And the reprint of its 1916 almanac has prompted many memories.

Settle Almanac that was originally published in 1915 and bore the date 1916. In those distant days you could buy the 250-page Almanac for tuppence. Here is a fascinating insight into life in and around Settle during the First World War.

The Almanac contains a number of fascinating articles, one being the early days of the Settle Volunteers. In the summertime of 1859 an unobtrusive advertisement announced that a meeting would be held at the Settle Court House “favourable to the formation of a Ribble Club for the Settle District.” At the end of 1859 what became known as the North Craven Rifle Corps was established. Walter Morrison, who owned the Malham Tarn Estate and presented the domed chapel to Giggleswick School, was captain.

The many advertisements give a good idea of what life in Settle was like in the early years of last century. You might buy second-hand jewellery in Chapel Street, glass and china and earthenware in Church Street. Tathams, in Cheapside, offered Irish rolled or smoked bacon. At the railway station were stocks of house coal, nuts, steam coal, slack and coke…Ref: 735