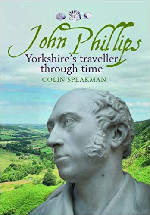 We will have this book personally signed by Colin Speakman…. There may be a delay in dispatching your order whilst we arrange this, we will advise you of dispatch time after ordering….

When John Phillips (1800-74) arrived in Yorkshire in 1819 as a penniless teenager with his uncle, the great geological pioneer William “Strata” Smith, he could have had no idea how the landscapes of Yorkshire were going to dominate his life. A brilliant cartographer and early geologist, Phillips became Secretary of the Yorkshire Philosophical Society and first Keeper of the Yorkshire Museum. He was among the first to produce detailed studies of the Yorkshire Coast and Carboniferous Limestones of the Yorkshire Dales. First Secretary of British Association for the Advancement of Science launched in York in 1831, he went on to make major contribution s to astronomy and meteorology and became a palaeontologist of world renown, appointed Professor of Geology at Oxford University and Keeper of its great Museum of Natural History. The book is also about another side of John Phillips – the pioneer walker-writer and artist. Having tramped thousands of miles in geological wanderings, Phillips produced two of the best early guidebooks to Yorkshire, including one of the world’s first-ever railway guidebooks. This absorbing book shares John Phillips’s passion for the Yorkshire landscape, and in both word and image retraces his footsteps through Dales, Moors and Coast. It suggests how Phillips was an inspirational force behind Britain’s National Park and outdoor movement, one of the great early interpreters of the Yorkshire landscape who has influenced later generations in countless ways…..Ref: 1194 (Signed)

Colin Speakman is a keen walker and environmental campaigner, and the…