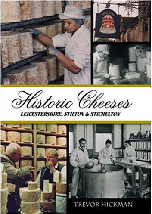 This book offers historical insight into the story of Leicestershire, Stilton and the new controversial Stichelton Cheese. It is lavishly illustrated throughout with over 200 photographs. It has review coverage in local press; POS is available. Author Trevor Hickman was invited to write a history of the development of Stilton Cheese back in 1994, which sold over 17,000 copies. Now, because of increased interest in the historic impact of cheese being produced in Leicestershire and Nottinghamshire, he has written “Historic Cheeses: Leicestershire, Stilton and Stichelton”. Learn the history of Midland cheese’s starting at the very beginning, from the Roman occupation to the present day. The book contains a pictorial record with many engravings, drawings and historic photographs. Cheese has probably been made in England for well over four thousand years. The first cheese makers would have been the early farmers of the Neolithic period (between c. 4000 and 2400 BC), and the first cheese was probably made by accident. It was part of the staple diet of the marching Roman legions, the Mediterranean invaders that conquered and occupied England for almost four hundred years. It is repeatedly referred to in Roman cookery books. Archaeological surveys have indicated that Leicestershire was farmed by numerous Roman-British communities. They would have raised cows, goats and sheep, and made cheese. Stilton Cheese is considered to be the finest cheese ever developed in England, the King of English Cheeses – enjoyed by millions of people world-wide. The village of Stilton sits on Ermine Street, the Great North road, (A1) a highway constructed by the Romans, possibly along the line of a prehistoric trackway that skirted the marshes of eastern England. Stichelton, one of the UK’s newest cheeses has courted controversy due to its use of unpasterised milk in its production and has had a whole half hour slot on “The One Show” devoted to the subject. “Historic Cheeses: Leicestershire, Stilton and Stichelton” gives the reader the true story through indepth historical evidence. .Ref: 958