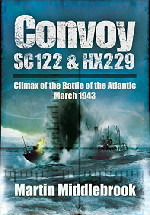 : Climax of the Battle of the Atlantic, March 1943

Winston Churchill wrote, “The only thing that ever really frightened me during the war was the U-boat peril.” Had the convoy link between North America and Britain been broken, the course of World War II would have been different. As it was, there was a period during the winter of 1942-43 when the Germans came close to cutting the North Atlantic lifeline. In the first twenty days of March, 1943, the Germans sank ninety-seven Allied merchant ships, twice the rate of replacement. During the same period seven U-boats were lost and fourteen put in service. no wonder Churchill was worried Convoys SC122 and HX229 sailed from New York harbour for England early in March 1943. Admiral Doenitz deployed forty-two U-boats to trap those two convoys. Twenty-one merchant ships were sunk in the ensuing battle. The Germans called it “the greatest convoy battle of all time.” It was a major turning point in the Battle of the Atlantic.

Convoy, every manoeuvre of the merchant ships, their escort vessels, the long range aircraft cover, and the attacking U-boats is documented in a powerful narrative that will recall for many readers Nicholas Monsarrat’s best-selling novel The Cruel Sea In many ways, this book could be the story of any of the hundreds of convoys that sailed the ocean during the war. One important chapter throws new light on three controversial aspects of the Battle of the Atlantic: why there was an “Air Gap” long after full air cover could have been provided, why the convoys had to sail with dangerously weak naval escorts; and how the Allied outwitted the Germans in the radio decoding war….Ref: 1040