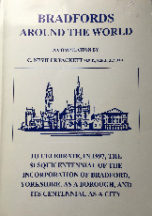 Bradfords Around The world

This book is Pre-Loved

ONLY ONE COPY OF THIS PRE-LOVED scarce BOOK

No ISBN.. in good condition for its years ..there is some slight scuffing marking to the cover

A Compilation to celebrate, in 1997, the sesquicentennial of the Incorporation of Bradford, Yorkshire, as a borough, and its centennial as a city. ….places named Bradford from Africa Australia England & North America

Globetrotting Bradford businessman Neville Packett, who has died aged 91 in Ilkley, was ‘one of a kind’ and ‘light years’ ahead of the competition, according to his nephew Charles.

Neville Packett was a former managing director of insurance brokers Sydney Packett & Sons, which he joined after war service in the Middle East and North Africa.

The firm, now in Shipley, was founded in Bradford by his father Sydney, a former Deputy Lord Mayor of Bradford, in 1920 and is now run by Charles and Andrew Packett and is the one of largest independent insurance brokers in the north of England.Ref: 1220